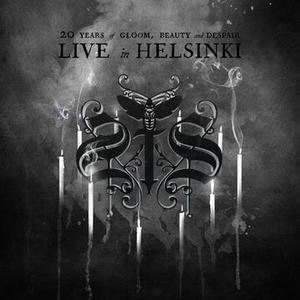 COVID shut down a lot of tours really quick last year. One such tour was Swallow the Sun’s international tour to celebrate their twentieth anniversary as a band. The band did manage to get about half of them in before they had to exit the road, and this live release celebrates the band’s performance in Helsinki, Finland.

As the band’s first live release, it also covered quite a bit of ground. There’s two sets to indulge in for starters. The first set is the band playing Songs from the North II as a whole, complete with a string quartet. While some may not be as thrilled about this as others, due to this being the ‘quiet’ album from that trilogy, there’s no denying it has a fantastic impact in the live setting. The strings give it an even greater emotional impact (check out “Away”) and it makes it a unique listen instead of just the band playing it straight up live. Even if the more melodic side of the band doesn’t do it for you, there’s still something special to behold in the second set. This one is a fan-voted set, and as such, there’s a number of classic gloomy cuts to enjoy (a solid batch of picks spanning their career). The sound is quite crisp and clear, with the crowd coming through at the end/beginning of the tracks to add to the live flavor.

Swallow the Sun has been able to nail that gloomy sound and make it palatable in the live arena, and 20 Years of Gloom, Beauty, and Despair sums things up nicely for them. A nice look at their twenty years as a band too, showcasing both their soul-crushing and melodic sides with equal flair.