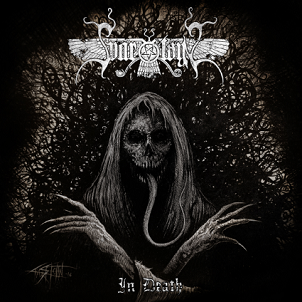 We previously recognized Svartsyn’s 2013 Black Testament album as being “stock.” Such terminology isn’t harsh, but it sure doesn’t get one’s undergarments moist. Frankly, the Swedes, or rather, the one man brigade known as Ornias, fall prey to the idea that permanent, if not terminal velocity is the only path to take. A glance into the band’s back catalog shows that hasn’t always been the case, with 2007’s Timeless Reign displaying the appropriate gusto and variation. The band’s new In Death, though, displays neither.

Appropriately whipped up into a maelstrom of blinding guitars and even faster drums, Svartsyn start matters off with “Seven Headed Snake,” a number that tips the scales at over seven minutes, but somehow fails to run out of steam. Ornias’s riff ideas are certainly not in question, many of which feature unrelenting tremolo builds and discordant speed-picking runs. In earnest, take what’s found on “Seven Headed Snake,” slightly invert it across six more cuts, with the only other tune of note being “Thrones of Black Death,” a rollicking, hardened run through mid-placed black metal.

Ornias, or Svartsyn as a whole, has painted themselves into a difficult corner. The elements behind blast-attack, ultra-extreme black metal rarely allow for experimentation, let the alone the type of variation to create distinction from album-to-album. Svartysn has failed to achieve any of that on In Death, which earns the album the same tag as its Black Testament predecessor, “stock.”