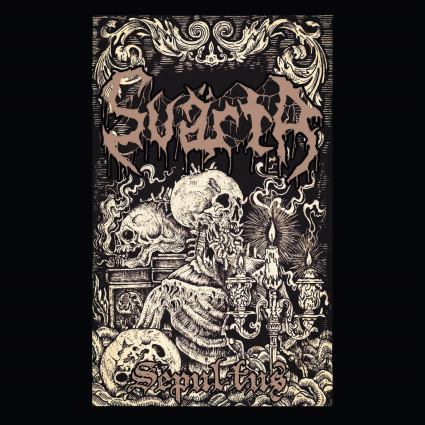 The allure, the “lo-fi-ness” and most importantly, the jarring songs are all here on Svarta’s Sepultus full-length debut. A Swedish duo whose identities are masked in their promotional shots by the two members holding up the skulls of dead animals, Svarta’s approach and outlook in the black metal sphere relies heavily upon the style’s “buzzed-out” elements, as in, the guitars buzz, the drums keep up with the buzz, and the production follows suit. Attack of the killer bees this is not, but surely you see where we’re going when trying to pinpoint the ebb and flow of the six songs that make up Sepultus.

The proper place to start is with the hazy wall of guitars, which generally comprise of odd chord shapes and the standard tremolo attack. It’s basically what a lot of the Norwegian bands started, Dark Funeral and friends ran with, and now is funneled through the whatever-wave of bands Svarta would fall into. Nevertheless, the chord ramming found on “Hädanfärdens sigil” is rather deft, running amok across eight minutes and change, highlighted by brazen blasts and coarse vocals. But the album’s highwater point comes on “Det sublima lidandet,” which closes the running order in a mass of black-washed riff action and a mess of double-bass pummeling.

Ultimately, the linear quality to Sepultus is what will catch the black metal throng. The fact Svarta has so much depth in the riff department is what will keep Svarta (and the debut album in question) above water. Beyond that, Sepultus, by all accounts, is a black metal lo-fi tour-de-force, a dead-ringer with little, if any let up. No real time to think on this one. Just strap on the animal’s head, get the wrists warmed up, and off to the races we go.