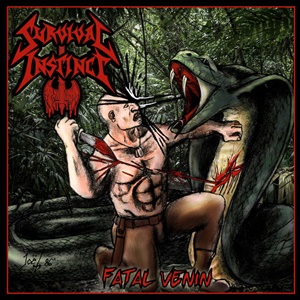 Certain acts impress immediately on name and cover art alone – before even pressing play, expectations resonate clearly what you’ll get. Such is the case for Survival Instinct – a band from Quebec, Canada that since their start in 2013 deliver a fierce brand of primal thrash that contains speed/blackened edges sharp and deadly. They’ve released a demo, two split offerings and three full-lengths prior to this newest five-song EP Fatal Venin – and seemingly have lost no adrenaline rush or intensity for this material raises every fiber of your being to destroy like a cyclone ripping buildings apart.

Even in small spurts of relative melodic calmness such as the first measures of “Night Speed”, the distant screams or wild lead breaks provide the aural madness before the speedy riffs and relentless snare/cymbal hits take command. Most of the time though, Survival Instinct push the musical/vocal accelerators to the max – sadistic, rapid-fire screams matching the heads down thrash parts, an amalgamation of influences from Slayer to Venom, Dark Angel to Demolition Hammer as well as early Razor. Mincing no words for death, destruction and the evil topics – “Poser Killer” sums up the rabid nature of lyrical content that keeps things on even keel with the crazy, frantic speed guitars and pummeling bass/drum activities. Given five songs that whirl by in under seventeen minutes plus the focus on aggression and assaultive atmosphere, you don’t mind the occasional nod to familiar strains of say “Raining in Blood” mid-tempo circular runs into a whammy bar/manic lead break that closer “Slow Death” provides.

Not for the commercial thrash consumers, Survival Instinct prefer to just crank things up to ten, turn on the evil side of the genre, and let the sinister side shine. Metalheads who love the underground side of thrash, where speed/blackened edges penetrate the material, Fatal Venin hits the mark.