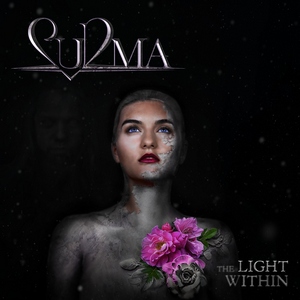 A major pitfall with some symphonic metal acts is the ‘more is more’ concept. Make the songs bigger and more grandiose, because it needs to be epic right? Well, leave it to new act Surma, which features Heri Joensen (Týr) and Viktorie Surmøvá in their ranks, to manage to that the essence of that ‘easy to employ but tough to master’ concept and chop it into bit-size and easily digestible pieces. The Light Within sets the band up to soar in the future with this debut potential.

On paper, there’s not much to discern Surma from the expanding legions of symphonic metal. Sure Surmøvá has been involved in acts in the past, and Joensen is well established in the scene, but this is essentially cut and dried symphonic metal if you dissect it down. But it’s the band’s approach to it and the way the formula is tweaked that really helps to set them apart. First single “Reveal the Light Within” is as good an example as any for the band’s sound. It’s immediately rousing in its upbeat nature and Surmøvá’s vocals are ethereal, but with some bite behind them. The melodies and guitar riffs (yes, the guitar riffs – this is also important) provide the essential backdrop, with some dreamy elements that elevate the chorus while the riffs provide a meaty weight to them. There’s a distinctively heavy feel despite the angelic nature of the music, and yeah, occasionally a near-folky vibe to songs like “Like the River Flows” and “Cages of Rage.” Bombastic synth moments are countered by some flashy yet not overbearing solos and give the band a more metallic feel to contrast that light-hearted vibe. Joensen occasionally adds to the vocals too, and nicely pairs with Surmøvá without it becoming predictable or mundane – operating to add flavors to the music. The album’s finest moment comes in the form of “Until it Rains Again,” where some mellow and tender moments are given some strong build ups in a masterful chorus that brings all the epic flair one could hope for.

The best part? All of these tracks manage to compact down the massive symphonic metal formula into 3-4 minute cuts that have all of the epic/cinematic vibes intact. The songs are to the point, but showcase that bombastic energy necessary for the genre without leaving the listener with that bloated feeling. It’s short, punchy, and never wastes a second in getting to the point – be it a triumphant melody, uplifting chorus, or moving solo. Even the near-ballad “Desire” stays on task, embracing a sense of longing instead of sticking entirely to the saccharine beats these songs tend to go for. All of these things make The Light Within an accessible symphonic metal release that’s easy to get addicted to. Surma has mastered the formula already with their debut, which means they’ve got the means to soar even higher with new material.