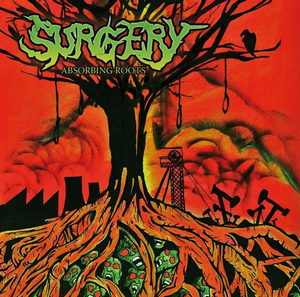 Whenever the description of ‘old school’ death metal comes into play, it’s a tough line to draw. The usual meaning to this is ‘rip off Entombed/Dismember for the 1000th time,’ but there are definitely some diamonds in the rough. Sometimes, you even get an album that manages to rise above your initial expectations by moving into wider territories than what you might expect on the initial vibes. Absorbing Roots is one of those records.

While no one is going to doubt the intention of an album like this one, with its initial opening salvo in the title track that makes its best attempt of making some crunchy mid-tempo Swedish riffs, don’t be so quick to give them the cold shoulder. Even over the course of said track, the band is already hard at work in attempting to go outside of the usual checked boxes of the genre. The biggest way is through melodies. A number of melodies pop up over the course of the album that feel almost melodeath in their tone (“Paradise” is a scorcher in this regard), but never go completely off the deep end with it. So it continues to deliver plenty of neckbreaking riffs alongside some catchier melodies, with some ample groove at times (“Depressive Reality”). It may not completely break the mold, these sprinklings do go a long way in keeping Surgery sounding more fresh than many other bands with a similar description.

Far groovier and more catchy than you might expect, Surgery is an enjoyable death metal throwback that doesn’t put all of its chips in one basket. They’ve got the basics all covered to a tee, and the solid additions ensure that you are going to be listening to it for a while. Because in the end, the riffs are fun and exciting – the best thing that an old school death metal band can rely on.