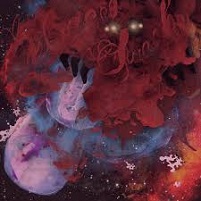 The avant-garde is strong with this one. Change is a tricky thing to engage in for any band but based on experiences with Surachai’s past work, Embraced is a testament to how to do it well. Unfortunately it’s a little too esoteric for its own good throughout otherwise, hyper-dense and spiraling in a thousand different directions, some awesome, others not so much.

Opener “Ancestral” tells you everything you need to know, with absolutely chaotic and likely jazz-themed programmed drums spiraling and absurd. Atop these drums the other instruments seem to be playing with the intent to diverge from one another, rarely with any kind of synchronicity or cohesion. That being said, it does work work surprisingly well. That it’s fifteen minutes long, however, can be taxing by the end.

The tracks that follow, “Sentinel” and “Surrender” drop the length and the intensity and similarly the memorability. A multitude of directions, intentions, sounds, stuff this thing to the brim. On the bright side it weighs in at a succinct 33 minutes and is makes for a fantastically intense gym-companion. It’s a quality experimental work, but an acquired taste in the extreme, proceed with caution.