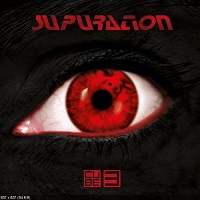 A curious beast, this one. A kind of side-band (same members, different music) of the French avant-garde monsters S.U.P, Supuration is a groove-laden but left-brained take on death metal that in parts comes across if someone mixed Amon Amarth and Queens of the Stone Age? Strange at times on CU3E? You bet. Awesome at times? Hell yeah!

That avant-gardeness comes out in a myriad of ways, be it the angular guitar styles “Sinergy Awakes” (the dead ringer for a deathy QotSA ) or the fantastic “The Flight.” The aforementioned Amon Amarth stylings erupt forth in the steady and thunderous vocal delivery of Ludovic Loez, though the consistent attention to groove and ‘headbangability’ of the songs themselves “Data Dance” certainly helps.

Despite the long-term quality, however, this one can be a dense nut to crack at first. Accessibility, owing to the musical heritage of the members most likely, is not the focal point the music, though it does come out over time (“The Incongruents” is an real killer). That being said, it doesn’t keep this from being an incredibly solid release, the third in what appear to be a series of thematically-tethered albums. Also makes it a damn shame it’ll be another ten years before a follow-up is issued. Très mauvais!