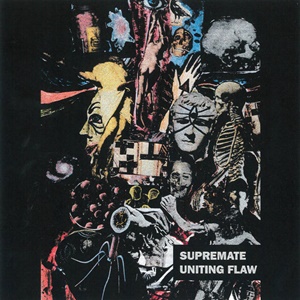 Featuring twins in the lineup with Temmu Leskinen (vocals, guitars) and Timo (drums), Supremate have a long history in the underground. Forming in 1999, they released three EP’s and two demos until 2008, taking a prolonged absence before releasing their first, self-titled full-length in 2015. Now we arrive at the follow up Uniting Flaw, and it’s a potent release of thrash-oriented heavy metal – where the key is not necessarily on one aspect overpowering the other, but a refined blend that keeps the group away from being prototypical.

Speed isn’t necessarily a main factor in the songwriting and execution – there are certainly sections where the energy level rises, but it’s more about precision and matching up the riffs/tempo to provide this steady, headbanging platform. Sections of “Peoples Divider” for instance contain this cultural/exotic texture – when off beat drumming gives chase to solid snare hits and kick mechanics, almost taking the work of Forbidden into 90’s Metallica territory, while the follow up “Territory” has a bit of Voivod/ Coroner darkness and alternative atmosphere against some uplifting Iron Maiden-ish transitions. Temmu’s voice matches up in a distant, militant manner – similar to Phil Rind of Sacred Reich where he’s clear and commanding during those Ignorance/American Way recordings if adding in that Sentenced melancholic feel. The lead breaks also follow a similar musically advanced vibe, not necessarily going for pure shred rather than setting the table for highlighting many of the hooks in the main verse/chorus combinations (check out “The Crown Don’t Make a King” for a great example of this enhancement). Supremate understand the need to be a little more straightforward at times, but still inject those alternative chord sequences for “Destined to Rule” that along with some sadistic laughter and gallop nuances make for a standout track.

Uniting Flaw will not be a record for everyone on the thrash or traditional heavy metal scene – as stated above, they have a unique way of executing their material that puts them on a left-field fringe of progressive or avant-garde. Don’t discount this album though – it’s ideal for those who want a little something different from the norm and rewarding as such.