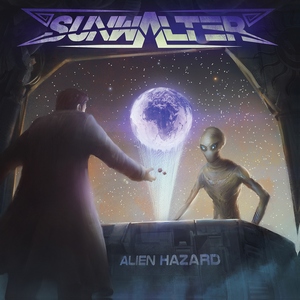 Adding onto the subgenre pile is that of Sunwalter’s Sci-Fi metal. Probably not the first band to tout themselves as such, it’s pretty clear early on (from the cover in fact) that you’re going to get a pretty space-y atmosphere when you turn this one on. For their second effort, it seems that they are getting their identity squared away, even if their greatest hour is still to come.

From sci-fi metal, you can take elements of symphonic power metal, melodic death metal, and more modern varieties together to get a good sense of what Sunwalter is all about. The sci-fi elements do tend to surface the most in the synth work, with carries a modern feel to it while having an outer space vibe (see “Green‘n’Grey”). It’s bouncy at times (think Amaranthe) but still keeps a more extraterrestrial tone. The one problem in this area is that it’s so loud that it does interfere with the guitars from time to time. Understandably they are trying to engage that sci-fi element, but it takes away from some of the power of the material (see “Forbidden Sun”). On the other hand, when the riffs are upfront, they pack a punch. Melodeath gallops are in full effect (see “Fermi Paradox”) and they fit quite well with the harsh/clean attack of Alexio and Olga Sol. Alexio hits a wealth of different extreme growls and croaks, while Sol’s energetic cleans have the necessary power to maintain balance. The album ends on an interesting note with a techno version of an older track (“Nibiru”), and they keep enough riffing in it that it’s not a drastic jump from what they do with the other tracks.

While they are mostly playing in familiar territory (and with some synths that can get in the way from time to time), there’s still something to enjoy about Alien Hazard. A bit more balance, symphonically, along with continuing to move into their own direction should give Sunwalter some additional traction.