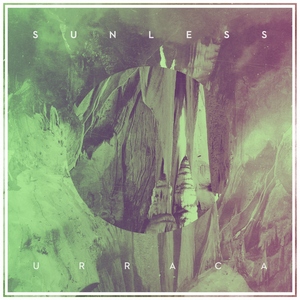 Last we saw Sunless was after an early 2016 demo, a two song release that took the dissonant death metal vibes and progressive/post influences and blurred them into a slurry. One year later, the band has returned with a full-length offering in the form of Urraca. Those in need of some quirky and outside the box death metal are certain to turn an ear towards this one.

Much like other acts like Ulcerate and Gorguts, there’s a dense and dark feeling to Urraca. There’s always a ton of things going on at any given moment, and it’s the type of album that one will need to have some patience and focus with in order to get the most out of it. That being said, the album’s approach, at 45-minutes, does tend to drain the listener, particularly on the first few listens. Jarring dissonant tones and rumbling guitar and bass work personifies some tracks like “Windswept Rock,” which can take more technical fury at times (“The Ancient Ones”) or a more progressive streak (“Gathering at the Skull’s Eye”). So there is a diversity within the flow, even with the sheer density of the tracks. The unpredictability of it gives a greater sense of resonance once it all sinks in, with stop/start drumming, atypical riffing structures, and bleak melodies all playing a part in keeping the listener on their toes.

As cited with their demo, there’s plenty of promise hiding within Urraca. While it can be daunting at times, those shimmers of true greatness find their way just at the right moments to keep plugging through the album. As they continue to focus and develop their craft (perhaps with a little more breathing room), Sunless should find plenty of favor in releases to come.