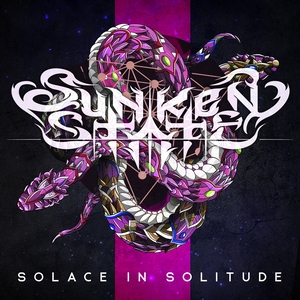 South African act Sunken State bring with them a modern slant to groove, death, and thrash with their debut full-length, Solace in Solitude. Formed back in 2018, they have previously released an EP but this marks their jump into album territory. While they do keep to the grooves, there’s plenty of bounce and entertainment to be had with their sound.

Bands that aim for that groovy, chunky sound tend to do it best when there is something for that to work off of. Sunken State has managed to capture the essence of that already. “This is the End” opens with a nice, galloping groove that emanates a weighty and playful groove and it slowly builds up into a nice chorus. As a track that focuses more on groove above all, it still manages to weave in some melodies and a few light moments, as well as really ramp up the heaviness later in the track. While some songs follow the groove, some tracks also give the music a thrashier, melodeath vibe. “Swindler” has a great, epic feeling to the melodies (and utilize some clean vocals here too)as they pull and push with the groovy segments. The aptly-titled “Chaos & Turmoil” hits some massive grooves and breakdowns but also dabbles with some faster tempos and zippy guitars to provide a greater sense of contrast. The band’s contrast of heavy and melody is well-used – they don’t stick to one element for too long, and because of that Sunken State feels more fresh by the time you finish the album.

Effectively sticking to the grooves without completely tethering themselves to something too heavy or melodic, Solace in Solitude is a fine introduction to Sunken State. Those who are seeking some big, bouncy grooves are sure to get a kick out of it, while the band lays some fertile ground for their future.