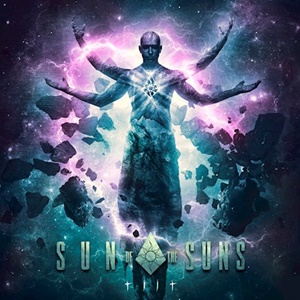 Naming an album after a Sumerian word and roughly translating to a concept in which human’s DNA is modified to create a superior being, TIIT ensures this Italian band Sun of the Suns aren’t going to be your normal, conventional new act in the metal genre. Containing members of acts like Carnality, The Modern Age Slavery, and Nightland plus featuring drummer Francesco Paoli from Fleshgod Apocalypse and DGM musician Simone Mularoni on bass, there’s little question about the talent present that should make ears perk up more for this debut record. The sci-fi conceptual content regarding a contaminated Planet Earth taking place in a dystopian future landscape deserves an equally engaging, dynamic musical presentation – and that’s what you will get here in a modern, extreme, and often progressive context.

Much of the approach for these musicians resembles a thunderous assault on all senses – blitzkrieg modern riffs with the fastest blasting possible, only to shift into these gargantuan down-tuned groove parts of a semi-progressive, polyrhythmic quality. Occasionally providing an ambient reprieve in the form of “I Demiurge Part 1” or “To Decay to Revive”, the listener will feel waves of emotion transporting themselves into this alternate dimension – a world where influences from Fallujah, Rivers of Nihil, and Gojira careen against Job For a Cowboy, White Chapel, and Meshuggah. Dynamic, lower chugging riffs of an otherworld variety along with circular melodic guitar runs/sweeps give “Flesh State Drive” memorable hooks, while the insane gallops and stunted transitions for “The Golden Cage” allow the dual growl/scream vocal approach that extra level of haunting intensity. Precision picking, tight as a whip musical mechanics, and supplementary orchestration/keyboards heighten anticipation for the next whirlwind thrown into the aural landscape – Sun of the Suns adept at balancing the intensity and extreme velocity with appropriate groove or melodic tidbits so as to not overwhelm ears (and brains) and flatline the impact. The two longest tracks appear at the end of the record – “Of Hybridization and Decline” seesawing between melodic tranquility and jackhammer relentlessness, while the seven-minute plus “I Emperor of Nothingness” contains progressive mid-tempo rhythms, a spirited lead break, plus driving modern death breakdowns as well as a calm, almost movie soundtrack conclusion.

TIIT is one of those records that musicians of this genre will study, use as a launching pad to develop even more hybrid metal upon and move listeners in need of that aggressive diversion as the soundtrack that speaks to them.