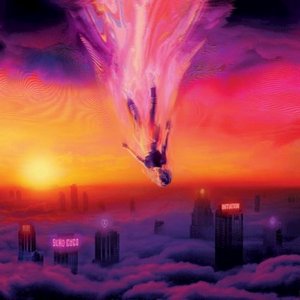 With all forms of music, there’s a certain level of homogeneity that comes up due to the sheer number of bands/artists trying to squeeze into a somewhat defined sound. No one is going to accuse Canadian act Sumo Cyco of this though, as the group has developed such a massive blur between genres and styles across their previous material that there’s just no box large enough to contain them. For their third full-length (and first for Napalm Records), the band continues to knock down wall while providing a cohesive and incredibly fun listen.

Initiation is an album with personality. As you move across each track, you get a slightly different twist on the formula though there are a number of constants to enjoy. As already noted, it’s just sheer fun from beginning to end. The combination of bouncy, energetic riffs coupled with everything from electronics and punk attitude, to poppy hooks to dancehall beats. It’s far from a ‘dyed in the wool’ type of metal release, but it never claims to be such either. The potent combination of metal/rock/pop/you-name-it simply veers into whatever territory the song needs. So you can get a track like “Bystander” that unabashedly mashes infectious, poppy choruses with driving metallic fury while making it look totally natural. Grooving, danceable rhythms hit in “Bad News,” while insidiously catchy hooks almost mandate bodily movement and hand-clapping upon the listener in highlight “Overdrive.” The band doesn’t go full-on for the entire time though, as “Power and Control” utilizes some light calypso vibes to complement its groove, and bonus cut “Awakened” leans into a more melodic chorus that makes for a fitting close to the release.

Clearly, there’s a lot to branch out from, but the most commanding and constant factor is how infectious the music manages to be. Sweetnam’s vocals are certainly a major presence, as she combines both a fierce power while keeping it playful, but the band doesn’t simply rely on her to chew all of the scenery. What elevates Initiation above its peers is that the music itself is just as ear-worming. There are impactful melodies that plays in the background of “This Dance is Doomed” as well as more immediate hooks and riffs of the appropriately named “Cyclone.” There’s not a track that you can’t pull a few immediately interesting pieces from, and then grab a few more on subsequent listens – a tough feat to accomplish.

Given the increased reach due to Napalm, and Initiation being the strongest set of songs from Sumo Cyco to date, the band is ready to take off and soar. While some may find Initiation to be somewhat polarizing in its disregard for the hard rock/metal rules, there’s no denying the unique flair that Sumo Cyco champions. If you want an album that’s going to make you torn between banging your head, flailing around dancing, and shouting like a pop star, Initiation is going to make you grin from ear to ear.