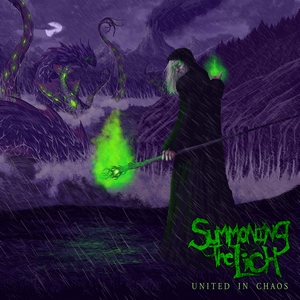 If power metal bands can sing about fantasy, then why not some more death metal ones too? Summoning the Lich take their inspiration from Lord of the Rings, Magic: The Gathering, and Dungeons & Dragons and put it to a throttling death metal soundtrack. United in Chaos is a conceptual album (the first of a planned trilogy) that details the rise of the Lich and the fall of the Kingdom of Rodor. All of which leaves a very strong first impression for this act.

Thrashy and tech-driven death metal is the name of the game here. Aside from the fantasy lyrics, you’ll find yourself in pretty familiar territory as United in Chaos unfolds. Acts like Inferi or The Black Dahlia Murder will quickly spring to mind due to the often frantic pacing and intricate melodies that the band laces into their music, but just like those two acts in particular, there’s a lot of attention given to the melodies to ensure that it stays memorable instead of resulting in a tech-y blur. The tracks are quite dynamic, with sections that race ahead unhinged, only to tapering off into more melodic and slightly less frenzied areas, and occasionally some slowdown into more mid-tempo battery to really up the brutal side of the band. “Predatory Reflection” does this change-up well, with some slower parts that demand some movement and headbanging with their immediacy, and the track even moves into some slower atmospheric stuff in addition to some furious speed runs with some intricate yet playful riffs to dig into. The band isn’t above pulling out some breakdowns either, and their use is impressive, as lead-off single “The Nightmare Begins” aptly demonstrates.

While there is some familiarity to what the band is doing from a musical perspective, kudos are given for their lyrical endeavors, as well as the impressive amount of melodies and hooks they inject into a destructive formula. Summoning the Lich lay down some solid groundwork from which they can build from as they continue their story forward, and they are no doubt going to draw in some tech-fiends with ease.