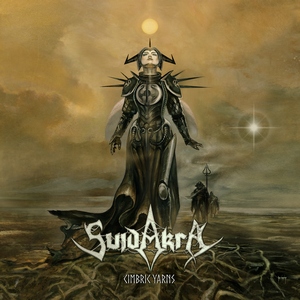 Suidakra has never been one to shy away from making some journeys and taking some risks in their music. Over the years they’ve hit upon black metal and evolved into a more folky melodic death metal tone. For their thirteenth album, the band has decided to take a trip into that of orchestral acoustic music – do not expect a traditional heavy metal experience.

Cimbic Yarns continues the saga from Realms of Odoric in a prequel of sorts. The story of the album takes place thousands of years before the Odoric tale, and the acoustic nature of the material gives the fantasy tale an almost Lord of the Rings type of mystique. Don’t expect a lot of upbeat material though – the main vibe throughout the 10 tracks is more of a melancholic and somber one (a nice match to the dreary elegance of the cover art). But keeping things interesting and feeling a bit more than the usual ‘campfire folk’ experience is a slew of guest vocalists as well as string instruments and flute. For an acoustic release, there’s sometimes a more minimal feel to things, but Cimbic Yarns feels soundtrack-worthy. It very much plays into the vibe of truly being a soundtrack for the story that is being told through the lyrics. While some may not particularly the lack of more initially catchy and simplistic approach, it pays off with more listens. There’s an emotional richness to tracks like “Ode to Arma” that make the album feel like the real deal.

Knowing what you are getting from Cimbic Yarns is key to one’s enjoyment. An all-acoustic release that is more the soundtrack for a reflective day than a bombastic and cheery affair, it may not become an everyday ‘must listen,’ but for those seeking an occasional escape from the doldrums of the day to day experience, Suidakra have drafted just the elixir you are seeking.