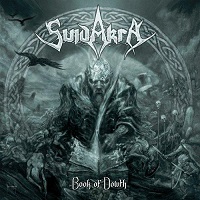 Ten albums in a 13 year history – that’s almost unheard of in today’s scene, unless you carbon-copy studio records to the next in a quick cut-and-paste rehearsal to recording fashion. Such is the life of Germany’s Suidakra, an entity they’re proud to expand and progress with, based on their tenth album,Book of Dowth.

For those coming into the Suidakra ranks for their initial exposure, this trio (who expand to a four-piece with a second guitarist Jussi for live action) play melodic death metal with traditional and Celtic folk leanings. You’ll get clean vocals against deep growls, heavy electric instrumentation against bagpipes and woodwinds, along with a sweeping atmosphere that Suidakra will transport the listener into another dimension of space and sound.

The acoustic guitars and sparse violin within “Mag Mell” for instance brings to mind the best ballad moments of Blind Guardian circa “The Bard’s Song, with singer Arkadius leading the lyrical tale as a mystical mentor. When the gentlemen feel the need to throw their creative belts into overdrive, you get the powerful sensation of harmonic guitars with strong Celtic themes and Lars’ octopus-like feet and arm drum display on standout track “The Dark Mound.” I’m sure many feel like they are ready to stomp, clap and shout at the more Skyclad-ish “Stone of the Seven Suns,” for the chorus is prime for singalong audience involvement.

I love Arkadius’ diverse guitar pacing that can often move from deep death picking to more traditional, power harmony lines on “”Dowth 2059” and “Balor.” There isn’t a moment within these ten tracks where I felt Suidakra went too bombastic or forsake the intent of delivering real musiv, proving that you can meld seemingly diverse sub-genres without turning the proceedings into a hodgepodge riff wreck. Book of Dowth has sharp production values and an adequate 40 minute run time, ensuring instantaneous return trips for thorough listening pleasure.

Gothenburg influenced death meets power/folk metal, Suidakra should be a household name in this business