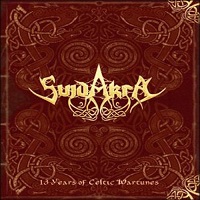 Quite the busy year for Arkadius and the boys, with their stint on this year’s Paganfest and now the domestic release for the CD/DVD compilation, 13 Years of Celtic Wartunes now hitting the shelves. This scribe has always had a soft spot for these Germans, primarily due to their distinctive blend of melodic death metal and folk metal, a recipe that has yet to be equaled save for up-and-comers Eluveitie, so it wasn’t too much of a reach to rank this as nothing short of a keeper.

We’ll start with the DVD, which consists of a full concert shot at the 2007 installment of Wacken. Professionally shot in front of a hometown crowd, Suidakra rely heavily on the Emprise to Avalon platter, with Arkadius leading the charge alongside highly underrated lead guitarist/clean vocalist Marcel on “Darkane Times,” “Pendragon’s Fall,” the instrumental “Dead Man’s Reel” and newer “The IXth Legion.” Arkadius’ energetic charisma sparkles throughout, with the singer/guitarist often bounding across the stage effortlessly.

Also included on the DVD portion is a live acoustic concert with Marcel handling the bulk of the vocals. Suidakra’s songs are melodic and catchy enough that even in the most stripped-down of settings, they shine, especially the soothing “A Runic Rhyme” and triumphant “When Eternity Echoes.” The band even throws in a cover of “Whiskey In A Jar” and “Wish You Were Here” for fun.

The CD portion is a best-of, taking 17 tracks from all seven studio albums, including the next-to-impossible to find Auld Lang Syne debut and Lays From Afar. Interesting to see the gradual mutation in the band’s sound, as early numbers like “Heresy” and “Morrigan” provide a glimpse into where the band was headed. Other notable numbers include the heroic (and totally awesome) “Signs for the Fallen,” the speedy “A Vision Demise” and “Reap the Storm,” culled from 2005’s Command to Charge.

As we indicated earlier, Suidakra is never one to slack on the quality of their releases, just look no further than the monstrous Signs for the Fallen album. Pure excellence all around, 13 Years of Celtic Wartunes is the ideal window into one of the epic folk metal’s flagship acts.