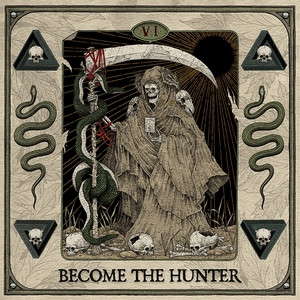 Suicide Silence certainly had their work cut out for them after the very critical reception to 2017’s self-titled release. It was ambitious, and saw the band wanting to step out of their deathcore roots. While the execution was rather sloppy, it did show the band wanting to stay true to their own designs. So after that misfire, what’s a band to do? It’s to crawl back into your safe space and deliver the inevitable ‘back to the roots’ release right?

In listening to Become the Hunter the answer isn’t all that simple. While it is quite noticeable that the band brought back quite a bit of heaviness and deathcore chugs to their repertoire, they haven’t decided to completely forget the existence of their last album – for at least a few moments. The band’s nu metal roots still remain, and can be heard with the album’s first track (sans the surprisingly strong opener “Meltdown”) “Two Steps.” It’s also a track that feels just about the same as everything else they’ve done to date. While it’ll no doubt welcome back some disenfranchised folks from the s/t, it’ll get some shrugs from everyone else. The same goes for follow-up “Feel Alive,” with its persistent chugs. A few tracks do shake things up though, such as the more deathly and blast-y pair of “In Hiding” and “Death’s Anxiety,” but their impact is limited. Likewise, the pairing of “The Scythe” and “Skin Tight” also showcase a more natural progression from the s/t ‘experiment,’ with a more genuine Suicide Silence feel to the darker and moody atmospheres. However, said tracks aren’t the norm over the course of the album and despite vocalist Eddie Hermida’s flurry of varied extreme vocals, most of the music tends to fall under the uninspired due to the reliance on chugging.

While Become the Hunter will probably strike a chord with its intended audience, it’s safe to say it won’t reach much past that. While other deathcore acts have expanded their reach (Whitechapel) or doubled-down and upped the heaviness (Thy Art is Murder), this is a ‘comeback’ effort that is satisfied in (mostly) giving fans more of the same thing they signed on for over a decade ago.