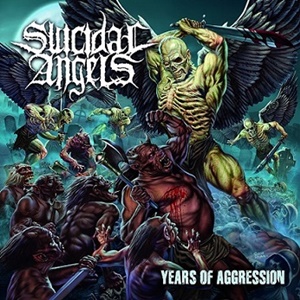 Active since 2001, Greek thrash band Suicidal Angels remember the early years of trying to appeal to a generation of metalheads who thought their style was ‘dinosaur rock’ in comparison to the extreme or nu/alternative genres. Perseverance pays dividends though – Years of Aggression being the quartet’s seventh studio album, and fortunate to parade stages far and wide with bands like Slayer, Exodus, Kreator, and Cannibal Corpse in the process. Continuing their ‘all killer/no filler’ outlook, these nine songs dip back into some of their initial traditional/pure metal influences in spots, keeping their material fresh in the process.

The jackhammer crunchy guitar rhythms and complimentary relentless bass/drum attack provide the Suicidal Angels musical foundation right away for “Endless War” – these veterans knowing when to let bassist Aggelos Lelikakis take groove control midway through for a mandatory mid-tempo headbanging extravaganza. The injection of stronger early 80’s harmonies/melodies takes place during “Born of Hate” and “Order of Death” – where aspects of Saxon, Accept, and Iron Maiden transform these thrash songs into a more memorable, distinctive category, including lead breaks that tell a story even when propelling notes at the speed of light. Never fear that the group lay off the accelerator – “D.I.V.A.” is a double kick, razor sharp exercise in Slayer-esque blitzkrieg sonic obliteration, while the drumming/guitar interplay for “The Roof of Rats” is equally legendary, Nick Melissourgos bellowing the lyrics from his hallowed heart with venomous accents that should rip listeners to shreds. The two epics appear as the middle and end tracks for the record – “Bloody Ground” featuring a serene guitar-oriented intro that swells musically into something similar to Megadeth circa Peace Sells, while “The Sacred Dance with Chaos” contains shimmering, exquisite clean guitar passages, a tremendous doom-esque riff foundation and the proper heaviness to prove the band isn’t just all about speed and intensity.

Years of Aggression isn’t going to rewrite the already established essential textbooks of thrash- instead Suicidal Angels prefer to add their own creative chapters to the latest versions, and as such deserve accolades and appreciation for the output and execution are top notch.

Suicidal Angels – A Bloodbath of Aggression