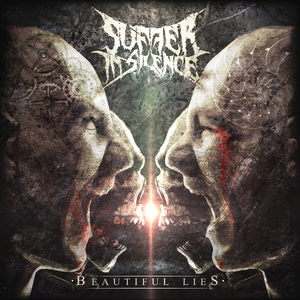 Increasingly rare is the band that can capture the feral nature of death metal and implement melodies that are incredibly catchy without diluting the formula. Italy’s Suffer in Silence recently released their third full-length, Beautiful Lies, and it’s the type of album that handles both of these things with grace and power.

Suffer in Silence don’t shy away from faster, thrashy tempos (as many more melodically inclined acts tend to – opting instead for the mid-tempo range) and this is their greatest asset. Like fellow countrymen like Fleshgod Apocalypse and Hour of Penance, there’s a penchant for speed that rips through the opening tracks. The way that they weave in melody never fails to grab your ear, particularly in the soloing. Even a slight black metal sound can be heard when the band hits some of their quickest moments. The middle of the album sees them slowing down a bit, with “Live with No Tomorrow” hitting some almost Hypocrisy-ish melodies along the way and the (mostly) more mellow instrumental “Lost” giving the listener a chance to catch their breath. The rest of the album stomps away, with “Zero Respect” and “The Four Horsemen” both notable for their catchy grooves brought in along the way. All along the way, there’s plenty of memorable material to meld with unmistakably death metal energy.

Even if it does reference bands like early Soilwork, Arise, and Callenish Circle, Beautiful Lies effectively puts death back into melodic death metal. Suffer in Silence understand the basics of the genre and use them in their best interest, never allowing the album to feel stale or repetitive.