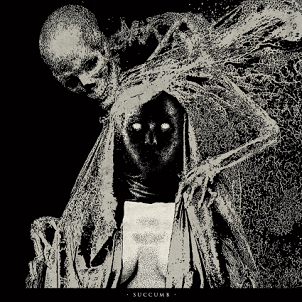 Chaos of the uncontrolled type (because what else is there?) is the current flavor of the day, from the unhinged railings of Nails to the experimental offerings of Full of Hell. Such brazen and messy stews go a long way toward keeping extreme metal off-balance, sure to provoke many like-minded bands in its wake. Nowadays, it’s pretty boring to just be a plain ‘ol rote extreme metal band. You need an edge, like San Francisco’s Succumb (formerly known as Cloak), who are armed with the kamikaze, flailing vocals of Cheri Musrasrik.

On the band’s self-titled debut, Succumb blast, push and elbow their way through grind-on-technical death metal corridors, all performed without much semblance of structure. It’s in these formatting quirks where the band’s true purpose lies, as heard on “Destroyer II,” an unrelenting dose of obtuse death metal (guitarist Derek Webster is the true hero here with his ultra-creative chord work) and Musrasrik’s cavernous roar. Musrasrik is mixed to the point where you feel like she’s yelling at you from the sewer, basically, such is the echo and reverb place on her vocals. However, her coarse, seemingly improvised vocal permutations give cuts like “Bedchambers” and the spewing “Coal Dark Earth” the sort of murky DM cacophony that is hard to achieve.

Succumb’s approach to death metal is that of a band without any particular handle, which is why this album serves up so many frequencies and colors. From Musrasrik’s straightjacketed roar to Webster’s unique, coy guitar offerings, Succumb have created a whirling dervish of modern death metal, subsequently becoming the soundtrack to your mental funeral.