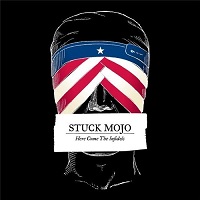 Always a bummer how Mordred get left out of the early rap metal equation. The Bay Area group actually started out as a straight-level thrash band before vocalist Scott Holderby began to incorporate his superlative rhyme skills. Subsequent albums Fool’s Game (1989) and In This Life (1991) earned Mordred a sizeable following, but they were never able to capitalize on the popularity of Limp Bizkit and Rage Against the Machine, two bands they were well ahead of. Stuck Mojo largely falls into the same category; they too were early, never developed a sizeable stateside following, and, were beset with lineup turmoil. Therefore, it’s a semi-miracle they’re even putting out an album like Here Come the Infidels.

A short-lived reunion with original vocalist Bonz saw the rapper come and go rather quickly, but main dude Rich Ward appears to have found his man with Robby J. J., of course, is tasked with being able to rap over Ward’s formidable groove metal riffs, some of which still sound bouncy and fresh (see: “Rape Whistle” and “Verbal Combat”). J. (and Ward) even work in some big-league clean vocals on “I Am Legion,” which in all honesty, shows the band is better off using sung vocals on a more frequently basis. But as always the case with Stuck Mojo, you have to take the good with the bad. Hard to work around the goofy subject matter found on “Charles Bronson” or “Destroyer,” which is essentially J. rapping over a drum loop. (“Tambourine” isn’t far behind.) Eh, not really happening.

But really, the fact Stuck Mojo is still around is good enough. They had their day in the sun in 1998 with Rising, definitely, and had some obvious up-and-downs last decade while on Napalm Records. So as a self-funded band with a quality reputation, simply releasing albums on their own accord…it sure beats any drama-o-rama that was commonly associated with the Bonz era of the band.