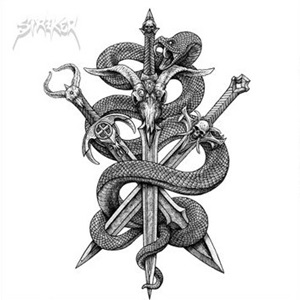 Internet technology ignited the global impact of the music industry since the late 1990’s – empowering musicians to take more control of their music, their brand, and their promotional impact. Edmonton, Canada’s Striker have gone the independent route early on since starting in 2007, signing for two albums with Napalm during 2012-2014 for Armed to the Teeth and City of Gold, reverting to the self-contained model once again for last year’s blockbuster Stand in the Fire. Makes sense to this scribe, given their cross-platform appeal through their addictive brand of metal that contains everything from melodic hard rock to power and thrash/speed aspects track to track. Quickly ‘striking’ while the proverbial iron is hot (touring North America and Europe on headlining runs as well as opening for major tours with Primal Fear and Sonata Arctica), this self-titled fifth full-length showcases an assured outlook, maintaining their high-quality songwriting as they focus on strengths that should put Striker top of mind when you want to consume current catchy anthems that could be a catalyst for the scene.

The searing twin guitar leads burst out of your speakers on opener “Former Glory”, the vocal melodies from Dan Cleary tailor made for audience involvement at high capacity. This is one area of emphasis that puts Striker ahead of 95% of the pack – multiple vocal harmony moments that aren’t merely overdubbed to death (i.e. these guys pull it off live), taking “Born to Lose” and “Rock the Night” to 80’s arena heights, the type that made Dokken and Europe fan-favorites. Crunchier guitar riffs from Tim Brown and thunderous double bass nuances aid the heavier second half of the record as “Over the Top” and “Curse of the Dead” showcase their Vicious Rumors meets speed/thrash abilities – Dan again up for the upper register task to go hand in hand with the energetic musical proceedings. A 55 second “Cheating Death” interlude appears mid-way through, as the eight originals whirl by in a tightly knit, compact manner – subscribing to the ‘all killer, no filler’ mantra that promotes incessant playbacks as you headbang and sing-a-long to your heart’s content.