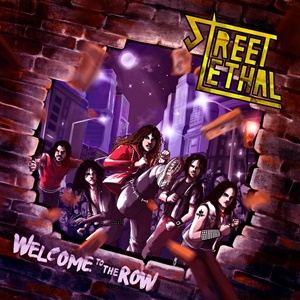 Inspired by the Racer X album of the same name, Street Lethal started in 2014 on the streets of Barcelona, Spain – intent on delivering a hefty mix of speed/heavy metal. Outside of guitarist Criss, the other four members adopt the ‘lethal’ surname beyond taking on bombastic stage monikers such as Guilty, Hell Rose, Killer, and Dann Atomic. It’s refreshing to have younger musicians take on some of the imagery and persona roles to elevate the proceedings to another level – because great heavy metal should be about escape as well as energy exchange, and it’s evident on the band’s latest effort Welcome to the Row that they live for a mix of 80’s influences and current artists who embrace the roots and spirit of the movement.

Expect guitar work and solid in the pocket tempos that straddles the lines of older melodic hard rock (think W.A.S.P. and Warlock here), with a bit of that younger angst and speed/power riffing aspect that put Accept on the map and keeps Skull Fist and Enforcer gaining more followers by the day. You can imagine sterling synchronized stage moves to the guitar, bass, and drumming maneuvers as the main hooks and solid as steel chorus for “Searching the Wild” rolls out, while the opening “Painkiller”-esque Killer Lethal power drum clinic that continues throughout “Tyrants” showcases the band’s penchant for dancing in melodic speed metal waters – early Metallica, Accept, and Enforcer careening into an explosive, engaging arrangement that raises the energy level to supersonic measures. The soaring and sadistic delivery changes Hell Rose Lethal switches into prove she’s more than up to the challenge of carrying the vocals and words for Street Lethal. Right out of the gate the title track gets the hand clapping, audience interaction moments maintained at a fever pitch, her ability to sustain trailing notes for the verses and glide up and down mid-range/falsetto aspects of her range commanding a la Leather Leone or Doro. Beyond the natural heads down quick hitters, the band also throw in a dynamic epic like “Rulers of the Underworld” where you get to hear a bit more stretching instrumentally, the guitar interplay between Criss and Dann confident through clean to driving transitions, along with another magnificent Hell Rose vocal elevation putting this in a Dio-esque class for comparison sake.

Portraying themselves in a cartoon-like sequence for the cover art adds another fun touch to the proceedings. Street Lethal aren’t reinventing the wheel in their speed/heavy metal niche with Welcome to the Row – they instead choose to remind people of the killer aspects that make this style vibrant and alive to resonate for a lifetime.