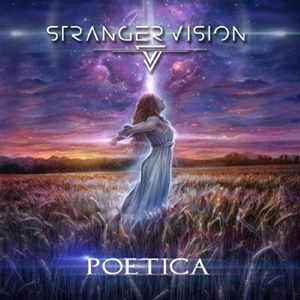 Setting themselves up prior to release of this debut album Poetica with special covers issued online of favorites by Tears for Fears, In Flames, and David Bowie, Stranger Vision already prove to be an all-encompassing metal act willing to take risks. Forming in the spring of 2019, they spent the better part of a year writing this material – choosing to team up with Domination Studios and the skills of Simone Bertozzi (Ancient Bards) and Simone Mularoni (DGM) for engineering, mixing, and mastering expertise. Accessing a foundation of power metal with symphonic and melodic death nuances, the quintet provides an intriguing sound that has contemporary appeal while also bringing up hints of the past.

Emphasizing cohesive hooks on both the musical and vocal fronts, the band place strong attention to main passages that can create connection on multiple levels – be it through cultural or dramatic tension, always driving to get key ideas across effectively while being catchy in some manner. Almost in a way that Savatage really emphasized from the 1990’s forward as “Soul Redemption” and the mid-paced follow-up “Never Give Up” illustrate, the latter containing some solid uplifting vocal melodies from Ivan Adami along with background choir support for the chorus and killer guitar harmonies weaving in and out of the arrangement from Riccardo Toni. Three shorter interludes appear at the start, midway point and conclusion – “The Dying Light” the best of the bunch, featuring an acoustic guitar/symphonic instrumental start before the progressive, neoclassical/ electrical charge kicks the energy up ten notches. Whether power metal or traditional minded, Stranger Vision seem to build off the foundation with natural branches, including those minor details of vocal melodies/harmonies that make “Rage” and “Defying Gravity” two standouts. Also seeking out some support from other Italian/ veteran musicians for special guest situations, the best of the bunch feature vocalists Alessia Scolletti of Temperance for the ballad “Memories of You” and Zak Stevens (Savatage, Circle II Circle) for the dramatic “Before the Law”.

Wishing new acts would sometimes subscribe to a ‘less is more’ output straight away as fifteen tracks and 64 minutes of material can be a bit too much this early in the game, Poetica leans heavily to a sound that people into The Mob Rules, Savatage, and current Helloween savor, while hinting at heavier and symphonic angles. Definitely a group to watch for the future.