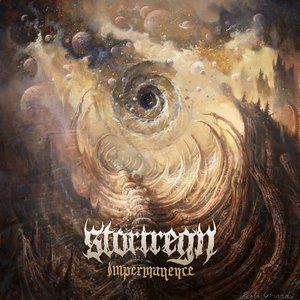 Sometimes it’s wise not to make some assumptions about what’s coming your way based on a few variables. Given the label behind them, the stunning Paolo Girardi artwork, and seeing the words ‘tech-death,’ there was a part of this scribe that simply expecting more of the same. Listening to the band’s latest effort, Impermanence, quickly flung those pre-conceived notions out the window!

Upon hearing the massive opening track, “Ghosts of the Past,” it’s very clear that Stortregn are not your average tech death band. There’s such a massive ‘90s Scandinavian black metal side to the whole thing that it shook the tech-death notion straight out of mind. Surely, there’s plenty of that to be found – from the frantic jagged riffing, bass work, and dips into some jazzy territory, but the way that the band blends it with Dissection-esque qualities turns it into a real thrill. The tech death adrenaline does rage with the next track “Moon, Sun, Stars,” but it also rears itself into proggy territory (tastefully, one might add), but the melodies are soaked in pure meloblack. Later tracks like “Multilayered Chaos” and “Timeless Splendor” even go so far as to toss in some traditional heavy metal influences into the whole thing, thus spinning it into even more varied directions. What’s really best about it is that despite all of these influences vying for your attention, on the whole it’s very smooth and feels seamless. Black meets death meets prog meets NWOBHM may not fall off the tongue, but these songs take the blend and really concoct something special with it. To add to that for a final note, while the music is at the proficiency level that you’d almost expect from the scene (and label), it’s never a direct focus. You can tell it’s there, but Stortregn does a fine job of making sure that you appreciate the songs themselves instead of just honing in on tech wizardry.

An impressive release that should garner more looks than it might initially appear, Impermanence bubbles with excellent genre-blurring and playful musicianship. Stortregn may not have been on this scribe’s radar (and probably many others) before this release, but they will certainly be quick to grab some attention from this point onwards.