Stormruler – Under a Burning Eclipse (Napalm) 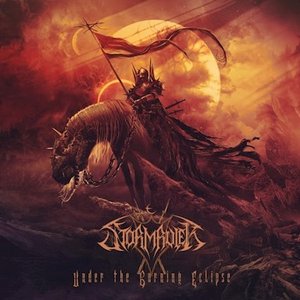 As black metal continues to evolve and mutate into countless forms, sometimes it is nice to see a band that focuses on the pure, primal fury that the genre can unleash. That buzzing and raging war-like cry with just the right amount of grandeur to it. Stormruler hit this out of the park on their debut album, Under a Burning Eclipse, while also giving a more cinematic vibe.

Influenced by fantasy and Souls-like games, Stormruler bring out a desolate yet gripping journey that is fueled by frantic buzzsawing guitarwork and tremolo melodies. It’s the sort of thing that really encapsulates the Scandinavian scene in the late ‘90s/early ‘00s. That cold, almost icy feeling due to the furious guitarwork and blastbeats but still bringing up an epic and glory-driven feeling. One that Stormruler intensifies by adding an interlude in between each track. This could have also spelled catastrophe if the band didn’t pull it off, but it not only works as a cohesive gel between two tracks, but it also gives you a moment’s reprieve from otherwise vicious attack. Sure, some of the songs, like the epic title track or triumphant “Of Hallowed Souls and Distant Flames,” incorporate some melodies into the tracks themselves, these short interludes create a larger sense of scope and mood-setting. It’s an excellent mechanic that the band has brought about, and it pairs rather effectively with the warring ball of fury that the music can really dig into.

Those who miss the fury of full-on black metal, but also don’t want to be completely bombarded by nothing but buzzing from start to finish would be wise to look into Stormruler. They capture the essence of the genre’s roots while giving it an even more intense and cinematic contrast. Thrilling stuff that still provides a sharp, melodic edge.