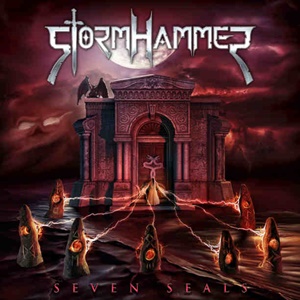 Veteran bands often feel the need to shake things up when playing a specific style of metal for decades. Germany’s StormHammer started in the early 1990’s – releasing their first full-length Fireball in 2000, eventually signing with Massacre Records for Echoes of a Lost Paradise in 2015 and now issuing their seventh record in Seven Seals. Gaining a new vocalist/session guitarist in Matthias Kupka (best known for his work in Emergency Gate), the time seemed appropriate to venture a bit into modern production and tone aspects for these eleven tracks – although the results seem a touch mixed as far as the final output.

Bursting out of the gate with a thunderous, heads down double-kick Megadeth-ish speed montage that seques into mid-tempo anthem riffs for “Sleepwalker” makes logical sense, Matthias allowed to showcase his gritty screams and semi-falsetto melodies against a rather calm good versus evil chorus, the refrain before the lead break leaking out the modern metal atmosphere aspect. By song four the acoustic guitar and piano aspects to “Taken by the Devil” provide a dynamic reprieve as the bluesy, tranquil ballad rolls out – but also showcases a bit of Matthias’ limitations when it comes to his accent and lower range for the verses. You get the feeling at certain times that American modern hard rock affinities appear with specific hooks as the music rolls out against their normal Teutonic power metal platform – where with the title track the heaviness and melodic turns plus a straightforward punchy rhythm section groove may make the listener think of Trivium or 90’s-period Metallica, Manfred Ewender delivering a circular guitar passage that penetrates metalheads globally. Exotic licks make the second half epic number “One More Way” another stand out, the forceful vocals mirroring the militant rhythms and versatile double kick /fill work from drummer Chris Widmann. The duality of clean to extreme vocals now available for StormHammer can be a unique differentiator to most power metal offerings – it’s all in the way that things are used in the proper context, which at this point appears to be a work in progress.

Loving the concept lyrically of an unopened temple vault in India and the moral dilemmas, thoughts, and speculations surrounding what’s inside – as well as the myths and religious aspects – Seven Seals gives StormHammer a new foundation to stand upon. It’s uncertain how many old-timers will leave the flock and if there will be enough newcomers receptive to champion this newer modern / power metal outlook. At this point, it’s murky and clouded, hopeful to shine a bit smoother on the next go around. 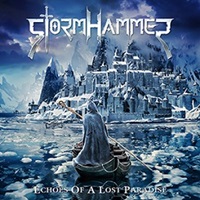