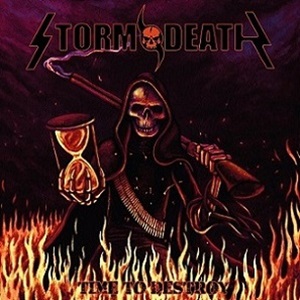 Primal angst develops in raw forms- unleashing potent outcomes for most metal bands. Case in point- Sweden’s Stormdeath. Take a gander at the leather and bullet belts adorning the quartet, the old-school logo ethics (the S and H thunderbolts), and their admitted affinity for drinking beer, worshiping Satan to start a band that plays the kind of music they are fans of themselves- this is down to earth thrash metal bristling at the roots of the movement. Together since 2008, they have had two hundred copy run EP’s for Godrun in 2010 and Promodeath 2012 prior to signing with Germany’s Witches Brew for this full-length record.

Time to Destroy doesn’t mince words or execution through its nine tracks. Stormdeath prefer to gravitate towards a mid-tempo Exodus meets early Metallica/Sepultura thrash style with occasional gallops and a solid rhythm foundation of pummeling four string and persistent snare/ double bass action. It’s the type of band where the bassist Incinerator throws down a solo gaining the late Cliff Burton seal of progressive approval on “Built by Lies”. Where thunderstorms and narrative soundbites accentuate the song needs, as well as occasional blackened guitar trill nuances or vocal effects to heighten segment endings and changes in one of the militant highlights “Law of Death”. The band elaborate more in the instrumental sections of an epic like “Dreamwalker”, the tranquil, clean guitar segments giving an added melodic element for Desekrator’s intuitive lead break – although parts of the chorus come off towards W.A.S.P. catchiness than your average thrash act would consider.

Guitarist Evil Bastard doubles up on vocals, and his hoarse, sandpaper-ish delivery isn’t polished – and that’s okay as the rough around the edges, occasionally staggered performance makes “We Are the Devils” and “Black Sorrow” more endearing to their intended audience. Ending on a two-minute blitzkrieg “Gatlingun” that would make Sodom maniacs drip in sweat, Stormdeath won’t revolutionize the movement so much as stay the course, and a decent European counterpart for the next generation of thrash upstarts to support.