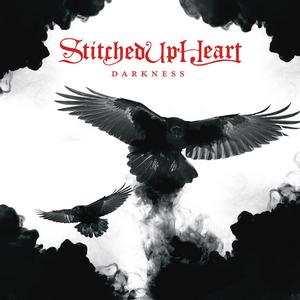 Stitched Up Heart made a sizeable impact with their debut, Never Alone. While admittedly more locked into the hard rock than metal scene, one could hear influences that ranged from all ends of the spectrum. From radio-friendly hits to atmospheric indulgences, there was a lot to take in and it had some incredible depth for such a release. With that same vigilance to staying outside-the-box, sophomore effort Darkness doesn’t simply go the easy route in providing Never Alone II and instead offers more artistic experimentation and an even wider breadth of influences to absorb.

Thoroughly modern in design, the biggest expansions to the band’s sonic palette have to do with electronics. One will notice an increase, sometimes drastically depending on the song, in this area with both the sound of band and Mixi’s vocals. As the first track that was released early last year to promote the album, opener “Lost” is a perfect first peek. There’s a feeling of continuity from Never Alone with hard-hitting riffs and an infectious chorus (and some later aid from Godsmack’s Sully Erna), while still pushing that noticeable tweak in direction. The band’s alternative metal crunch continues comes out swinging through “My Skin,” “Problems,” and “Warrior” – all while delivering a slightly different mix of tempos and other influences to make the tracks stand out. “Warrior” in particular showcases a more rock-friendly and triumphant chorus while utilizing an electronic bounce that makes it more playful and enticing. “Dirty Secrets” swings on the more groovy side of the fence, with chunky midtempo riffs with gentle electronics to soothe at the same time.

The band starts to showcase a more gentle side by the time that the title track comes around. It prances with an almost gothic metal atmosphere, but with a more ethereal, positive upswing in lyrical content. Follow-up “Bones” has an almost whimsical, poetic feel to it with Mixi’s vocals almost like a lullaby at the start as it slowly builds to something heavier but still soothing and fairytale-like in tone. It’s a real gem in the latter half of the album. Undoubtedly the biggest departure for the band’s sound comes in with “Crooked Halo,” which brings in floaty atmosphere and EDM-level electronics to the forefront to accompany Mixi in an oddly intoxicating mix. It may be a stretch to some, but it’s utterly addictive if you let it in. The album closes on a sure-fire highlight in “My Demon,” which melds many of the experiments the band attempted with the album and fuses it with more throttling riffs, which leads to a spectacular finale sure to leave a lasting impression. In the end, each track offers a different texture and vibe while carrying forward the themes of light/dark and finding the positivity in striking such a balance – favorites are sure to change as more listens are absorbed and processed.

Intent on not repeating themselves for their second release, Stitched Up Heart shows they aren’t afraid to expand their horizons with confidence on Darkness. Keeping the strong points of blending genres, Mixi’s soaring and charismatic vocals, and grooving/heavy riffs with a subtle ear for underlying melodies, the new additions to the band keep them at the forefront of the modern rock/metal scene and worthy of carrying the torch forward.