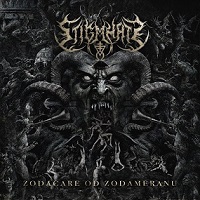 Stigmhate’s Zodacare Od Zodameranu is an unconditionally hateful and sincerely negative black metal record. For the most part, Italy’s Stigmhate are a run-of-the-mill black metal band but at least they’ve got a better sound than most of the mill. There’s nothing in this album that’ll throw you off but there’s not much that’ll turn you on to it too strongly either. Don’t take me wrong, it’s an enjoyably dark, heavy and fierce black metal album because anything that sustains this kind of havoc-wrecking hatred for a solid 48 minutes is pretty awesome.

Stigmhate are about as good at luring in listeners as they are at losing them. Even so, Zodacare Od Zodameranu is fantastic as long as no one expects it to be as catchy as its first impression. All twelve songs start out extreme enough to deceivingly give the idea that they’ll escalate as compositions generally do but Stigmhate are much more consistent with their sound than the average band, which can be a good or bad thing. The constant dark transcendence has a nice balance but the repetitive riffs become humdrum at times. Overall, it’s not bad.

“Abraxas” is one of the songs that work especially well with Stigmhate’s ambiguous style. The treble and bass have great chemistry, guitarist/vocalist Marco’s voice stays vigorously evil thru every verse and the drums roll in monstrous blast beats, it’s a very fine formula. The eleventh track is titled “XV” and until we get our hands on the lyric sheets it’s questionable what it’s about because the number XV (15) has varied values in mathematics, magic and religion. “Pleroma Apocrifa Mistica” is another notable song with its doomy intro and distortedly dark body, temporarily breaking away from the stingingly fast tremolo saturated in most of the songs.

Stigmhate have wrung aggressive sensations and other obscure passions out from the arcane crypts of music, soul and savagery. Zodacare Od Zodameranu is a savage black metal record full of primitive hate and emanates pain-striking hues, but you probably guessed that the moment you heard the band’s name. Stigmhate, the word itself has a sting.