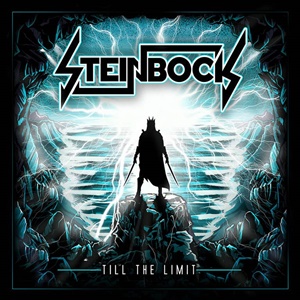 Thunderbolts in the band logo make for a strong initial metal presence – and that’s what you have for the heavy/thrash four-piece Steinbock here on Till the Limit, their debut full-length. This act from Spain have been together since 2013, releasing two EP’s in their career to set the stage for signing to Art Gates Records. It’s great to hear the younger generation take stock of classic influences and put their own twist on things – but there can also be some learning bumps in the road that are necessary to travel through in establishing yourselves in a crowded marketplace.

It’s quite obvious that Bay Area thrash has had a direct impact on the riffing and vocal style of Steinbock – guitarist Carlos LLadós has all the Hetfield-like rasp and mid-range forcefulness down pat on songs such as “War” and “Break It, Split It”, although the latter also features a bit of a rap-like sequence that is left field compared to the rest of his delivery. Lead guitarist Marc Pérez knows his way around the fretboard, elevating the proceedings through his fiery, shredding breaks that are emotive and incendiary for opener “Trash” as well as infectious on a cultural front during the semi-doom/groove-oriented “4 Vices”. The bass playing of Rafa Rodriguez in spots highlights a traditional, progressive slant a la Iron Maiden, beefing up the crunchy riffs and heads down mechanics that makes “Gamble Man” one of the record’s highlight, gang unison background vocals emphasizing key lyrics. It’s like Steinbock prefer the black album Metallica as their benchmark release, adding in a bit of traditional and groove metal elements from say Lamb of God/Machine Head to Maiden and early Ozzy Osbourne to differentiate themselves from the pack and stay relevant to modern/current audiences.

Possibly due to their younger status, these eight songs are solid in terms of composition and hooks – you just keep hoping they would let loose a bit and get freer to expand their outlook a bit. Till the Limit is a case of meeting but not necessarily exceeding expectations, leaving room for growth and hopefully a stronger follow-up.