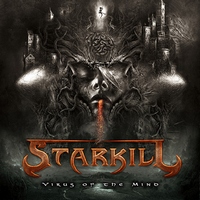 After last year’s debut, Fires of Life, Starkill are quick to return to the spotlight with Virus of the Mind. While only a year between releases, the material on Fires of Life was admittedly older material recorded under several names, leading up to the Starkill moniker. So with Virus of the Mind, we are getting a batch of new “Starkill” tunes, and they do a good job of pushing the band’s sound forward while adding/altering some dynamics.

Just peering at the striking difference in the approach to cover art, you can tell some changes are on the way from the debut. A much darker cover foreshadows a much darker album. Tossing aside some of the more blatant “Dragonforce-isms” from the debut and beefing up on the grit has done Starkill well. Virus of the Mind sounds more mature, focused, and cohesive; you can tell some of the band’s touring partners (most notably Wintersun and Fleshgod Apocalypse) have rubbed off on them. The guitar theatrics are still quite prominent, but the songwriting has really zeroed in, and the keyboards have also ramped up the epic factor of the songs. One only has to listen to the more methodically paced title track to hear Starkill’s more diverse approach to songwriting with this album. Of course, there are still some rippers, such as “God of this World” and “Skyward” for those that enjoyed them last time around. The other big difference that adds some flavor to Virus of the Mind is the use of clean vocals. Appearing in most of the tracks in some amount, it’s a noticeable change but again does well for the band, helping to bring a more emotive vibe to choruses like those of “Before Hopes Fade” and “Convergence.”

Starkill’s efforts to ramp up their game are executed with finesse and are bound to grab the band a larger fanbase. The band is capable of greatness, and if they continue along this path, it’s bound to happen with the all-important third album. Melodic death fans take note.