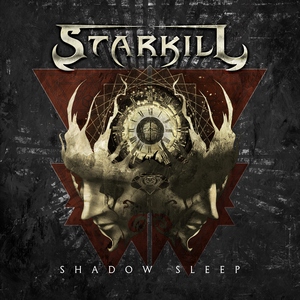 Starkill was quick to leap into their second album, 2014’s Virus of the Mind, but with it they also significantly jumped in their songwriting and maturity from their debut, Fires of Life. Taking more time (the band was label-less during the recording process) for the always pivotal third album, Starkill again makes leaps and bounds in their sound. The result is an album that capitalizes on their potential and is easily their strongest release yet.

Where Starkill’s first two albums wore their influences more on their sleeves, Shadow Sleep incorporates yet a wider swath of dynamics and yet sounds uniquely like Starkill. It seems the band has honed in on what really works for them, and what direction they want to go into, and it shows in the massive steps they’ve taken since Virus. Shredding guitar heroics have always been Starkill’s ace in the hole, and tracks like “Into the Grey” and “Burn Your World” aim to please fans, and the guitar theatrics have managed to become even more over-the-top while somehow grounding them into the song more naturally. Some of the riffs are some of the heaviest the band has written (see the blackened “Captive of the Night”), but at the same time, they’ve branched out so far that they can thrash and soar within the same track. Take “Ruin” for instance, with heavy mid-tempo riffs and a stunning solo taking centerstage, but balanced by some melodic synths that give an epic tone (alongside some clean vocals).

Of course, where there are some distinctly heavier tones, it’s also clear that there are more melodic elements at play as well. Some may sneer at the more “non-metal” aspects that come into play, but with the products of the band at their most melodic it’s hard to disagree with their potency. “Through the Darkness” and “Piece of Paradise” rely solely on clean vocals and feature a more symphonic approach while keeping Starkill’s musical base intact. Parker Jameson’s cleans sound more confident than ever, and he’s joined by Sarah Lynn Collier on several songs. The two make for an ethereal pairing on the two afore-mentioned tracks, but even the heavier tracks like “Razors Edge” and “Shadow Sleep” benefit from some moments of serenity among the shredding. Other songs like “No Savior” use a more modern synth section than the band has implemented intertwined with pummeling riffs building to an epic chorus, and “Farewell” takes the usual bombast and adds a more stadium rock feel to it and seems certain to become a live favorite.

With Shadow Sleep, Starkill are finally ready to bear their souls to the world. A diverse, 13-song offering that sees the band spread its wings from the heaviest to the most melodic directions they’ve explored while their confidence is at an all-time high. Intoxicating guitarwork surrounded by a tight rhythm section and vocals that lift the band to greater heights – Starkill is ready to put their stamp on the melodic death metal scene and beyond.