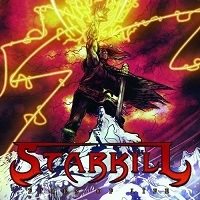 Chicago’s Starkill are a bunch of young dudes who can shred, fancy “epic” metal with a black metal twist, write relatively high-wire songs, and cite Dragonforce as an influence. Well, there had to be one odd duck in there somewhere, eh? Affinity for Dragonforce aside (you can hear it in the solos…at least they’re not sped-up in the studio), Starkill’s orchestrated brand of modern black metal touches upon many of the same things Dimmu Borgir has, and if want to really break it down, The Kovenant, and Chaosweaver.

Fires of Life is the band’s debut, the result of years of hard work under their previous Massakren moniker, where upon they produced a 2010 self-titled EP. It seems the band still is working out the kinks in the style-over-substance department, with some of the solo and melodic passages coming across as a bit too showy. But hey, if you can play, why not show it off? Regardless, the soaring guitar harmonies on “Below the Darkest Depths” are cool in a Scandinavian kind of way; same for orchestral smatterings on “New Infernal Rebirth,” which sounds like The Kovenant when they were just Covenant. Nexus Polaris in the house!

To wit, Fires of Life has a bit too much fat on it, and probably too many ideas. Yet, that’s what young bands do, so all is mostly forgiven. Starkill’s obvious grasp on most things Scandinavian-related is what will keep the album out of the doldrums, pending they don’t name-drop Dragonforce in any interviews.