Stargazer – A Merging to the Boundless (Nuclear War Now! Productions) 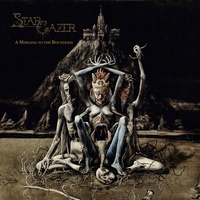 Stargazer is a name that has been held on a pedestal for many, and was this scribe’s first exposure to the band. Despite their twenty year legacy, the band has only released three full-length albums (their first was put out 10 years after their conception). Not to say things are usually quiet on the Stargazer front, but when you have members involved in a number of additional bands (such as Mournful Congregation and Cauldron Black Ram), things have a tendency to slow down. That being said, does A Merging to the Boundless live up to the building hype? Absolutely!

Hating to use the ‘melodic’ tag, Stargazer’s brand of blackened death does possess some avant garde and outside the box features. The sound gives it a more old school feel without coming across as behind the times, and influences run the extreme metal gamut, from Slayer to Morbid Angel to Absu to Atheist. Again, not wanting to toss in the typical ‘technical’ tag, there are some moments of more progressive riffing and structure (not to mention the audible and interesting bass work) but it never comes close to that ‘tech for tech’s sake’ stuff. Interestingly, some of the riffing does almost feel more heavy metal in nature than extreme, which is what gives it that melodic flair despite never compromising their mission. The tracks are quite dynamic, moving from the more calculating (“Old Tea”) to the blistering (“Black Gammon”) to the progressive (“The Grand Equalizer”). Each track does have its own characteristic tone to it, something you don’t hear a lot of in extreme metal.

At 39 minutes, A Merging to the Boundless is also quite digestible. Just enough to leave you satisfied but wanting to go back and replay it doesn’t seem like a chore to get through it. Melodic and technical in its own way, Stargazer manage to do their own thing and it shows. If we are given only one album every five years, at least they make it worth the wait!