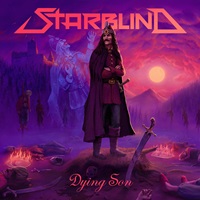 Graduating from Rapid Fire column ranks (as this journalist tackled their Darkest Horrors debut there in the July 2014 edition), Dying Son hopefully asserts Sweden’s Starblind as more of their own force in heavy metal. Intent on delivering 80’s oriented songwriting in a raw, melodic, and straight forward manner, you can have all the talent and ability in the world but it won’t amount to respect (or worldwide recognition) if you struggle to put things down in a solid hook-oriented, compact songwriting platform.

Twin guitar harmonies abound from the axe interplay of J.J. (Johan Jonasson) and Björn Rosenblad, and they aren’t of the super shred intricacies but prime time Iron Maiden-inspired circa Dickinson’s rise to prominence (1982-1989). Former drummer turned vocalist Mike Stark occasionally stays in his upper register a little too long for the verses of “Firestone” where a little more pitch fluctuation in the lower and middle register would give the listener a more memorable impression (love the background ‘woohs’ during the back third of the arrangement). Feel the battalion charge racing through “The Lighthouse”, while on the flip side the eleven minute plus closer “The Land of the Seven Rivers beyond the Sea” combines the epic side of current Atlantean Kodex and the master class brilliance of Steve Harris when developing enduring Iron Maiden epics from “To Tame a Land” to “Rime of the Ancient Mariner”.

Bassist Daniel Tillberg also flexes a little of his bottom end progressive leads, or can often chime in a third harmonic element that should allow audiences to partake in the melody-fueled festivities upon immediate exposure. The magical/mystical cover art and live production recording values courtesy of Rocka Rollas’ Cedrick Forsberg stack up equally to Starblind’s steadfast passion to up the irons, hoist the steel, and strap on the leather. Dying Son sees the band upping their game a touch in the songwriting department and reminding this writer of the years where Eddie ruled turntables and scared parents everywhere. A third album could pay dividends to the good. 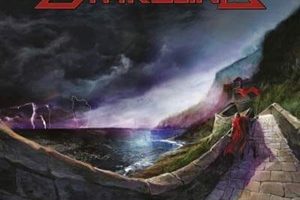