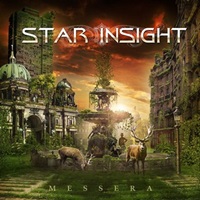 Nine years may seem like an eternity from band inception to releasing your debut full length album, but I’m guessing in the case of Finnish band Star Insight, the time has been put to great use. The self-professed ‘space/black metal’ sextet approach their music in a veritable hodge-podge stew manner, incorporating keyboards that can be dark/reflective one minute, then outer worldly or symphonic in the next measure, while the guitars, bass, and drums are purely in a melodic power/extreme metal realm.

Guitarist Jesse Etelämäki shares vocals with singer Pekka Rajala, and as a result can cover a wide swath of textures from whispering reflective passages in “Night with Fever” all the way to the throat bomb bursts that could peel paint off walls for the semi-cyber kinetic “Limbo”. It is clear The Kovenant and Dimmu Borgir are two heavy influences in the Star Insight aural outlook, but they also push the barrier in a Samael way, and then also come in with the occasional commercial-like keyboard passage or streamlined hook that has made Nightwish headliners since the late 1990’s. Check out the main verse to chorus build up synth player Jussi-Pekka Salimäki chooses to employ between his battery of sounds on “Emanuela,” as well as the groove propulsive “Oath,” to see how Star Insight use technology to enhance their metal platform, not become a prisoner enslaved through overarching reliance.

When you do hear clean vocal parts in the verses of the culturally swinging “Raven and Hell,” the sadness and inflection reminds me of classic Sentenced, and who cares if not every note is spot on precise and in key, as the overall arrangement will move you as the best power/extreme combinations can. Combining death, agony, and astrology as word themes also proves we aren’t dealing in anything familiar to the guts and gore/Cannibal Corpse crowd.

Far away from the typical act, Messera could be a hidden jewel in the symphonic, extreme, and power metal fields. Tidy at a minimalist 9 songs and 34 minutes, Star Insight will brighten many open-minded metalheads who seek sonic combinations that elevate mind, body, and spirit.