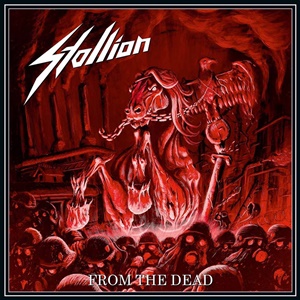 Certain markets have their staple favored styles in metal. As more extreme forms of thrash, death, and black metal took off stateside, Germany never abandoned a love of traditional metal and those offshoots. It’s one of the reasons many look to that country for new blood – which is what we have in Stallion. Hailing from the southern part of the country, this speed-oriented outfit tempers those bursts with straight ahead anthems from time to time, hitting the scene hard since 2013 with a demo, Mounting the World EP, and subsequent Rise and Ride full-length in the following year – earning press/fan accolades as well as leading to a prestigious Keep It True festival appearance. The quintet chose to take a bit of time letting the songwriting evolve this go around on their second album From the Dead – the maturation allowing for an even more dynamic experience overall.

What differentiates this current crop of songs versus their work of the past is the ability to decelerate tempos for the sake of creating stronger hooks or sections of songs that can galvanize audiences when airing the material on stage. It’s hard to not fist pump, headbang, or sing unison notes during the slower sections of “Down and Out” and the title cut – much like Accept, Bullet, or others of that breed. Pauly as a singer has a natural falsetto-oriented, high pitch register – still rough and tumble in spots, getting a Teutonic wail across but also exuding some of that sleaze/Sunset Strip influence to his register. There will be the all-out speed assaults that Helloween/Skull Fist mavens treasure, such as the opener “Underground Society” and “Step Aside”, to let the listeners sweat their frustrations to their final drop, the latter containing killer twin axe accents from Äxxl and Olli Gee that build to a fiery crescendo conclusion. One track could challenge their fanbase because of the pronounced keyboard accents and obvious commercial-leaning chorus – “Waiting for a Sign”. The obvious inclusion of those 80’s-oriented bright tones can cause dissension for those who like their traditional metal bands pure – but to me it’s a reasonably catchy cut that could be a hit, and the lead break plus speedier transition contains enough tantalizing tricks and melodic moments to win over the fence-sitters.

Right now, From the Dead is on par with the last record, in the sense that Stallion are proving their worth in a market that needs fresh blood to take over when the stalwarts retire. Speedy traditional metal that once again proves the 80’s will never die. 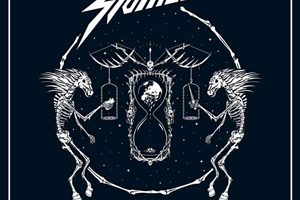