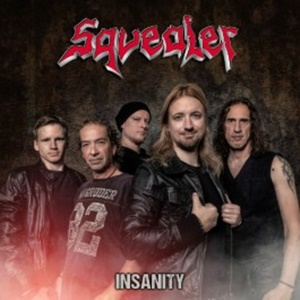 A Teutonic force since the 1980’s, Squealer probably gained most relevance during the late 90’s/early 2000’s through albums like The Prophecy, Made for Eternity and Under the Cross. Former singer Andy Allendörfer passed away in 2005, but guitarists Lars Döring and Michael Schiel have kept the band going, now on their tenth studio release for Insanity. Style-wise the group has always traversed a heavy/power line with occasional thrash tendencies, well-regarded for their polyphonic choirs that come into play for specific choruses or songs to create this larger than life unifying element that parallels the outlook of the band. Insanity continues that tradition, the ten tracks encompassing a mix of melodic, commercial learning outings against some energetic, power numbers with mixed results as far as quality and retention values.

You can’t go wrong with a double kick charging opener with speed riffs, blitzkrieg shred spots, and vicious roars vocally as “Into Flames” delivers on all fronts the classic Squealer approach that most ardent followers remember. On the other hand, slowing down for the follow-up “Salvation” gives off a more classic impression, the sultry, stunted vocal melodies and matching chord progressions are more aligned with “The Zoo” from The Scorpions meets an alternative, modern rock atmosphere – the choir background vocals the only engaging aspect to an otherwise dull, uninspiring cut. The record fluctuates between those heavy and more commercial tracks – ensuring no boredom on one hand, but possible confusion on the other as to where Squealer wants to sit for a sound. As a singer Sebastian Werner has a voice that can get the job done in lower ranges, but sounds a pinch strained or not as convincing when hitting the upper register (“Low-flying Brains” a primitive example). “Black Rain” contains guest vocal support from Zak Stevens (Savatage/Circle II Circle) and Bernhard Weiß (Axxis), a wonderful ballad that features brilliant choirs, beautiful piano parts and stirring, emotional guitar lead work – right up there with the best work of Primal Fear, Helloween, and Accept for comparison’s sake.

For this scribe’s preference when it comes to Squealer, the band need to think more about keeping their eyes on the power/thrash prize as songs like “Hunter of Myself” and the opener “Into Flames” rip, the former even including some interesting extreme-like tremolo runs pushed into proper power context. It’s not that Insanity doesn’t have solid, headbanging attitude and flawless execution – the problem is the quality of specific songs registers much higher than others, and the less than ideal moments could turn many potential newcomers off.