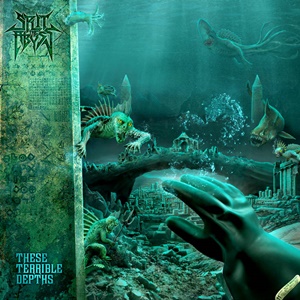 Spanning domestic and international lands to deliver ample coverage of the heavy music scene isn’t as easy to accomplish in today’s market as it may have been twenty or thirty years previous. More bands equal more product to pour through on a weekly basis. Recommendations from trusted souls often helps critics wade through the mire – thanks be to guitarist Justin Roth of War Curse for putting me in touch with the following three-piece Split the Abyss out of Cincinnati, Ohio and their third full-length, These Terrible Depths. Together since 2007, it is very apparent that these gentlemen dig deep into their raw thrash platform and sprinkle in punk/death influences to keep the ten-track record potent and fierce, subscribing to a philosophy that hits home with as much overseas consumers as it would those who love DIY, non-commercial outings.

Speedier progressions coupled with energetic rhythm section work and vicious, raspy vocals with rapid fire pacing seems to be the Split the Abyss game plan throughout – the lead work providing that elevated level of excitement against the thunderous drum fills. Circular riffing that has an early Teutonic thrash charge (think Sodom meets early Destruction) makes “The Histories” and “Universal Pessimism” early favorites, the central earworms maintaining that buzz for furious headbanging madness. Drummer Woody Corsini has a fundamental relentless passion to his main duties but can also expand things through some exciting fills and transitions during the ten-minute plus epic “River Marne”, delivering some interesting blast beats and slower double kick/ progressive passages in the instrumental sections to keep the listener engaged through the rollercoaster arrangement. Because they are a three-piece, bassist Matthew Hamlin holds court through a thicker, up front presence in the sound – a la Overkill, Sodom, and Motörhead in terms of his duties, allowing “Crawling into Armageddon” to sink deeper into your cranium through its evil intonation and pounding nature during the verses. Military and history/war themes are prevalent on the lyrical front – making sense given the heavy and brutal nature of the music. The record closes with a thrilling bonus take on “Mind Over Metal” by Raven – guitarist Max Kessler using his raspy vocal melodies to push the song into heavier terrain.

Hopefully next go around a bigger budget will allow Split the Abyss to gain even more on the production end of things – the sound is acceptable but primitive when compared to many bands that have been around as long as they have. In the end, These Terrible Depths should find favor with people into early Sodom, Destruction, and a pinch of Venom – and we need more of these bands in today’s scene.