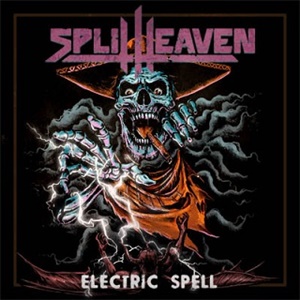 Five years removed from their last release Death Rider, Mexican quartet Split Heaven delivers more of their traditional heavy/speed metal wares to the table for their fifth album Electric Spell. Gaining Skelator singer Jason Conde-Houston back in 2014 brought a stronger voice that matches the energetic riffs and tremendous rhythm section action that is necessary for a convincing total team effort. Beyond the opening/closing flamenco-oriented instrumentals you get nine full tracks to devour, the band living for the glory of 80’s/90’s power/heavy metal with a mix of North American and European veterans that they pull from the influence bank to unleash anthems of versatility.

The guitar work of Armand Ramos and Carlo Hernandez (the latter doubling up on bass) revels in twin guitar harmonies and a battering ram of rhythm tricks/mechanics. They’ve certain listened to a host of Running Wild, Accept, Helloween, Iron Maiden, and Judas Priest records when you check out the main hooks, tight transitions, and exemplary, extended lead work for “The Haunted Palace”, while the stair step runs and ability to match up to the King Diamond-esque melodies for “Revolucion” creates this mystical darkness against some circular passages demanding audience screams exact to the proceedings. Jason’s delivery possesses that duality of Teutonic grit and obvious falsetto sustained screams – taking on a bit of that 80’s spirit and incorporating the chops of the masters to make “Helion’s Night” and “Sacred Fire ” early favorites. When you want a road-ready anthem that places the right syncopated drumming/axe rhythm parts in the ideal spots, look no further than their namesake song “Split Heaven” that would make Wolf Hoffmann smile for its “Balls to the Wall”-like charm and essence. Grabbing Achim Koehler for the mixing/mastering duties allows the band the right final quality tones and sonic push to shine through any desired listening device.

We never have to worry about the primitive form of classic heavy metal and it’s resulting power/speed offshoots to ever die with groups like Split Heaven continuing to record albums like this. Raise a glass, hoist the flag, and wreck your neck to these twin guitar-fueled songs as Electric Spell conjures up all those youthful feelings once again.