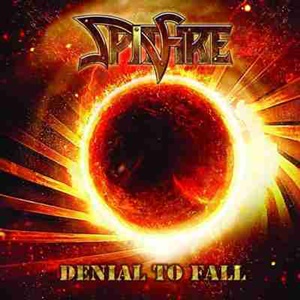 With roots in the 1980’s scene, Greek act Spitfire made an impact in 1987 through their debut album First Attack. Moving through setbacks (including a car accident derailing their original singer), the quintet issues their third album Denial to Fall, thirteen years beyond the last effort Die Fighting. Guitarist Elias Loginidis is the lone original member left from those early days, assembling a host of fellow musicians with plenty of seasoning in the Greek metal scene through their work in acts like Dark Nova, Dark Nightmare, and Sarissa to name a few. The final product as a result is a strong effort for those who love classic heavy metal steeped in power influences that are rich in UK/European influences.

Much of the main guitar riffs and musical framework focuses on conventional chord progressions of a mid-tempo or slightly faster variety that shake bodies and cause spontaneous cheers – the type that put Accept, Saxon, Judas Priest and their offspring on the map. Elias and second guitarist Panos Hatziioannidis fill the sonic landscape through crunchy, heads down work on “Naked Fire” and the title track, propping up the steel pipes of singer Tassos Krokodilos to carry home those melodies to the masses. Pulsating bass and proper keyboard phrasing appears within “Unholy” – the steadier marching tempo ideal for fans of older Dio-era Rainbow, while bluesy strains penetrate “Many Lies”, the steady groove-oriented tempo and lower range sneer giving off a bit of a early 90’s-Metallica atmosphere. These gentlemen aren’t going to rewrite the heavy/power playbook – they execute catchy parts, roll things into an ideal songwriting context, flesh things out with key gang-like fervor (especially during the “Back to Zero” finale) and leave listeners rejuvenated in their affinity for the genre.

Plenty of metal followers love these types of records which recall the 80’s spirit of classic heavy metal. Denial to Fall isn’t going to set the world on fire, but it should satisfy most while awaiting the next studio endeavors from Judas Priest or Accept.