Spirits of the Dead – Rumors of a Presence (The End Records) 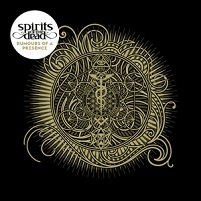 The retro psych bands of the 60’s and 70’s keep on coming and Norway’s Spirits of the Dead exhibit all the hallmarks of progressive folk rock of yesteryear. To a very large degree much of this style is owed to a mishmash of sources like Pink Floyd, Black Sabbath, Led Zeppelin and a dash of Blue Oyster Cult. In this case, all these musical veins are brought together to create a unique sound and summed up so unabashedly for the band’s third release, Rumors of a Presence.

Musically, Rumors of a Presence creates some Sabbathesque doom on tracks like “Red Death” and “Dance of the Dead,” but turn full circle into the psychedelic territory for tracks like “Seaweed” and “Oceanus.” Their body of work is quite impressive and the band digs deep, keeping that analog vibe consistent in every track.

Spirits of the Dead source some mesmerizing tones, and soulful psychedelic rock, melding it all together in a magical blend that is timeless. A track like “Rumors of a Presence” takes it time to gestate into a moving composition of lingering ambient sounds at the start and then sliding into King Crimson-like harmonies towards the end of the song. In fact, many of the tracks are fashioned in this manner, harnessing riffs and melodies together in the most subtle of ways and filtering it all so brilliantly.

I would suggest the listener to have patience with this sort of sound, perhaps allowing one to sit back and just have a go with it. I am sure after several repeat visits you will be amazed at what you hear and this is some of the finest psychedelic-stoner-folk-rock coming out of Norway. Spirits of the Dead may not be reinventing the wheel, but they sure know how to bring back sounds of the past and give it a fresh coat of paint.