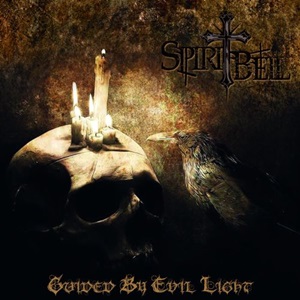 Western Hungarian band SpiritBell took shape as Aiming High, an Accept tribute act, bit the dust. Arising in 2010, they became rather productive for three years to release a demo, full-length, and EP plus a single before original singer Sándor Patak left the band, putting things on hiatus for some time. Awakening the ghost with a reorganization, Sándor returns with his original bandmates to record five songs developed after the band first split, filling out the proceedings with five demo tracks from 2012-2016 that make up this second full-length.

Guided by Evil Light has two distinct styles that separate the new from the old, that’s for sure. In fact, you may feel a sense of motion sickness as the first five songs possess a straight doom/heavy metal style, while much of the second half of the record lives for an 80’s power metal platform, be it European or US-oriented. The lower churning power riffs and supplementary evil, slightly above resting rate drum tempo puts “The Nameless Solider” into early Savatage meets Solitude Aeturnus comparisons, guitarist Zoltán Márkó peeling off riveting sequences that include a simple, clean echo refrain at the conclusion. Added bird squawking sets up “Breath of the Raven”, another doom dance affair that should appease long time Candlemass followers, drummer Ákos Heil punctuating key transitions with the right fill or crash cymbal needs. “Full Moon Madness” ends side one (aka the new material) on a more up-tempo fashion, the marching riffs and similar rhythm section accompaniment very powerful and uplifting in nature.

Songs on side two such as “I Am the Vengeance” and “Queen of the Night” make me think of the speed revolution that put Blind Guardian on the world radar screen during Tales from the Twilight World, or Warlord’s “Child of the Damned” in the case of the latter taken down a touch in tempo. A Cirith Ungol cover “Doomed Planet” closes the proceedings, offering the biggest see-saw in terms of whether you will love or loathe SpiritBell – the one of a kind vocalization of Mr. Patak. Part Chris Boltendahl, part shriek master (the chorus of “The Flying Dutchmaster” cringeworthy), he’s better equipped for mid-range metal anthems where he doesn’t rise and fall too much.

In the end, Guided by Evil Light has 1980’s heavy metal with epic/doom/power nuances firmly down – sure to go over quite well at Keep It True or Frost and Fire festival gatherings. And given their roots, SpiritBell may amass a decent cult of metalheads waving the banner high for the Hungarian underground.