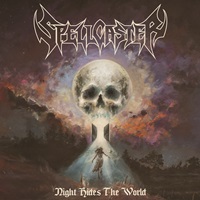 Often seen as a young man’s game, the spirit of heavy metal never dies – it rejuvenates and manifests itself in wider scopes. Wearing influences through battle vest ripped sleeves, Oregon’s Spellcaster since 2009 has developed a buzz-worthy discography in the modern/mature classic template. Night Hides the World is the third full-length, gaining a significant bump label-wise to Prosthetic Records thanks to a relentless road dog schedule throughout North America and Europe plus said attention (and sales growth) from the previous Under the Spell and self-titled records. Will the quintet formerly known as Leatherwitch (an equally killer moniker we might add) step up creatively to maintain a blossoming audience craving twin harmonies, catchy hooks, and steady anthems that rock?

Spellcaster succeed often for minimalist moments as they do for the times that they reach outside the normal scope of conventional heavy metal. Two examples include the high pitch, almost black metal trilling that gives chase to simpler, High Spirits-oriented guitar harmonies Cory Boyd and Bryce Adams VanHoosen peel off for “The Lost Ones” – or the echoing effects against the slower, tribal drumming while vocalist Tyler Loney powers through impressively in high resonance on the Queensrÿche meets Metal Church-ish follow up “Betrayal”. Sure the Maiden-like aspects crop up when wishing to be more musically adventurous on “I Live Again”, but the vibrant hooks and equally intoxicating gallop/tempo choices make for some mandatory devil horns adulation.

Adding cleaner, spacey textures to offset the normal up-tempo and anthem proceedings sets the listener up for edge of seat anticipation, while producer Zack Ohren (Exmortus) provides adequate care to give Spellcaster a vibrant sound that properly reflects what one would expect live. Nestling away in the Pacific Northwest, there’s this blue collar aspect that penetrates most of the metal bands from the area – as a result, honing in on the right musical interplay and key riff/tempo combinations for outstanding results. Night Hides the World provides US fans with a reason to think that traditional metal still has life amidst the younger generation – and similar to Visigoth give a lot of European bands fuel for further inspirational fire down the line.