Species – The Monument of Envy (Self-Released) 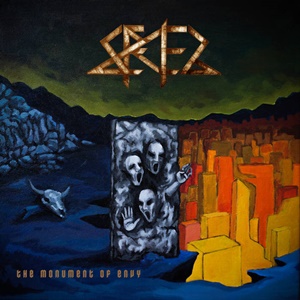 Seek metal globally and it can appear – sometimes within your social media feeds as this Polish thrash trio Species has with their debut EP The Monument of Envy. A relatively fresh band as they formed in October of 2018, they set about recording their first three songs in March of this year and here we have the fruits of that labor. What we have here is a progressive-oriented thrash outing chock full of varied tempos, advanced musicianship, and sandpaper-like vocals that should appease those fatigued by all the Bay Area pillage and rebranding of the 80’s that penetrates the current scene.

The vocal patterns often mirror the forward-thinking rhythms and intricacies throughout the three tracks – which isn’t a bad thing as it must be challenging for bassist Piotr Drobina to keep up with the thick riffs and dynamic changes. Check out the gear shift backwards for the title track, when initially going with a bit of Jason Newsted / Flotsam and Jetsam-like bass propulsion and exotic / jagged chord motifs, and then turning on a dime into this mid-tempo Metal Church-ish stomp during the final movements. Bodies will hurl and pits unfurl to the initial musical sequence for “Thy Name is Slaughter”, as the arrangement unfolds drummer Przemyslaw Hampelski unleashes his bag of traditional, power and speed/thrash tricks and intuitive gallop/tempo change mechanics. Guitarist Michal Kepka handles the clean to aggressive activities like a seasoned professional – you can tell he has an affinity for traditional metal as much as the power, thrash, and progressive genres, as the lead breaks possess finesse, taste, and a bit of that explosiveness one would want for the music Species develop.

Most will appreciate the raw nature of the tones and production – it’s clear but not too polished, almost as if you are experiencing the band live in the moment. In fact, if there’s one minor criticism, it’s related to the puzzling band logo that makes it difficult to make out Species – and may be an area to clear up on future outings. The Monument of Envy is a convincing debut, especially for those who love progressive thrash.