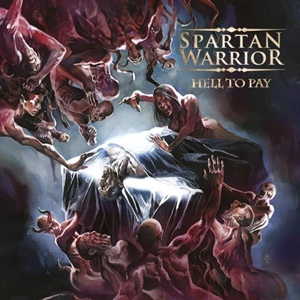 Straight-forward in their traditional metal approach, Spartan Warrior is another resurrection from the NWOBHM 80’s clinging to that second chance ring given the niche appeal for the movement. Releasing two albums in 1983’s Steel n’ Chains and a self-titled follow-up the next year on the upstart Roadrunner, they split in 1985 and came back together in the mid 2000’s, gaining German label interest for the third record Behind Closed Eyes for 2010. Which brings us to Hell to Pay, a fourth album with original members Dave Wilkinson on vocals and Neil Wilkinson on guitar, rounding out as a quintet with newer musicians but still retaining the essence and spirit of traditional heavy metal through these ten tracks.

Favoring a mid-tempo template with 4/4 style drumming and fiery lead breaks, Spartan Warrior aren’t going to razzle dazzle consumers – it’s fairly standard, down to earth riffing and verse/chorus action that gets the job done here. When they choose to flash some double bass or back and forth rhythm guitar parts, it elevates the energy to make “Court of Clowns” a highlight, Dave adding some sinister lower register bite to his nondescript delivery – the quicker twin harmony elements a bonus for retention’s sake. Acoustic guitars against the electric foundation take the ballad “Something to Believe In” into throwback territory, while “Covered in Lust” has that call to arms main riff and subsequent rhythm section build ups and breakdowns that make Accept maniacs shriek and shout. Liberally borrowing the early main hook to “Breaking the Chains” from Dokken in “Bad Attitude” won’t win Spartan Warrior many originality points, and even when bassist Tim Morton adds a bit of progressive sophistication to “Fallen” – it doesn’t elevate the predictable transitions and basic parts beyond conventional work, which may get the job done for some but will cause others to seek out stronger records from Angel Witch, Raven, or Saxon to get their fix.

Spartan Warrior aren’t necessarily horrible musicians and Hell to Pay on the surface delivers British metal in the 80’s manner – it just makes you wonder if they could be more critical in their riff/hook choices, how much stronger this could have been.