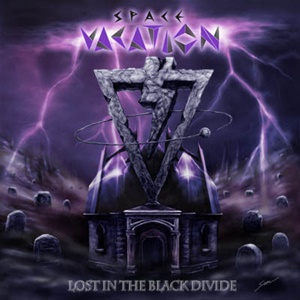 The legacy of metal starts for this scribe in the New Wave of British Heavy Metal era – Iron Maiden leading the pack, but there are plenty of strong contenders still plying their trade today (Saxon, Diamond Head, Angel Witch three that immediately come to mind). It’s wonderful to hear relatively new bands like California’s Space Vacation give their spin on the movement, hopefully churning their creativity on to a generation who didn’t get to experience those acts in their youthful 80’s days. With a new rhythm section in tow, Lost in the Black Divide is the proverbial third studio record that should vault the band into ‘must hear/see’ status – and based on the incessant spins this album has received over the past few weeks from this scribe, the four-piece should be very proud of these ten tracks.

The twin barrel guitar action of Scott Shapiro and Kiyoshi Morgan fills the landscape seamlessly, often pointed and sharp with fierce energy and occasional acoustic supplementation when necessary to flesh out the Ozzy-like charging opener “Devil to Pay” as an early highlight. Proper tempo variety enhances the guitar harmonies, with bass heroics often adding that dynamic separation for larger vocal melodies to stand out – “Stay Away” a mid-tempo arrangement with an addictive sing-a-long chorus. While many traditional metal bands throw the bulk of the hooks into the musical department, Space Vacation also emphasize multi-part vocal harmonies that rear back into 70’s AOR meets early Def Leppard lanes. The driving riffs and double bass combinations make “Roll the Dice” another highlight, while the ballad “Reason or Rhyme” takes on some piano overtures from special guest Edward Newton and a reflective, almost 50’s-style delivery vocally from Scott that proves these musicians are willing to expand their horizons and keep engagement on high near the conclusion of the record.

Location does play a part in the band’s sound – there is this effervescent breeziness for many of the twin guitar lines and tradeoffs beyond the vocal melodies. Check out “See You Again” and you’ll be hard pressed to not be bouncing around for the Maiden/Lizzy-like guitar activities against the sunny/uplifting lyrics yearning for love. Their last album from 2014 Cosmic Vanguard blew me away, and Lost in the Black Divide showcases the band’s propensity for looking deeper into all facets of melody, harmony, hooks, tempo, and arrangements- as a result creating another mandatory effort for all heavy metal/melodic hard rock followers.